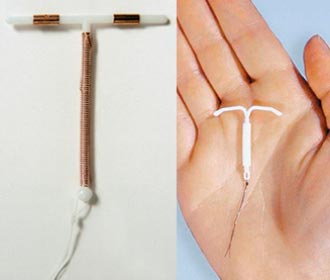 Levonorgestrel-releasing IUD: A T-shaped plastic device inserted into the uterus that steadily releases small amounts of levonorgestrel each day

Cu-IUD: Copper component damages sperm and prevents it from meeting the egg

Cu-IUD: Longer and heavier periods during first months of use are common but not harmful; can also be used as emergency contraception

LNG-IUD: Decreases amount of blood lost with menstruation over time; Reduces menstrual cramps and symptoms of endometriosis; amenorrhea (no menstrual bleeding) in a group of users

IUDs do not protect against sexually transmitted infections (STIs), including HIV. If there is a risk of STI/HIV, the correct and consistent use of condoms is recommended. When used correctly and consistently, condoms offer one of the most effective methods of protection against STIs, including HIV. Female condoms are effective and safe, but are not used as widely by national programmes as male condoms.

When can a woman have a copper-bearing IUD inserted?

Women who have puerperal sepsis should not have an IUD inserted. For women 48 hours to less than 4 weeks postpartum, use of IUDs is not usually recommended unless other more appropriate methods are not available or not acceptable.

Explanation of A, C, D and S categories

Explanation of I and C

No breastfeeding status was selected using the "Women’s characteristics" filters.

No medical conditions were selected using the "Women’s characteristics" filters.

Clarification: Any new headaches or marked changes in headaches should be evaluated.

No drug interactions were selected using the "Women’s characteristics" filters.

No other conditions were selected using the "Women’s characteristics" filters.

While some concerns have been expressed regarding the use of certain contraceptive methods in adolescents (e.g. the use of progestogen-only injectables by those below 18 years), these concerns must be balanced against the advantages of avoiding pregnancy. It is clear that many of the same eligibility criteria that apply to older clients apply to young people. However, some conditions (e.g. cardiovascular disorders) that may limit use of some methods in older women do not generally affect young people since these conditions are rare in this age group. Social and behavioural issues should be important considerations in the choice of contraceptive methods by adolescents.

For example, in some settings, adolescents are also at increased risk for STIs, including HIV. While adolescents may choose to use any one of the contraceptive methods available in their communities, in some cases, using methods that do not require a daily regimen may be more appropriate. Adolescents, married or unmarried, have also been shown to be less tolerant of side-effects and therefore have high discontinuation rates. Method choice may also be influenced by factors such as sporadic patterns of intercourse and the need to conceal sexual activity and contraceptive use.

For instance, sexually active adolescents who are unmarried have very different needs from those who are married and want to postpone, space or limit pregnancy. Expanding the number of method choices offered can lead to improved satisfaction, increased acceptance and increased prevalence of contraceptive use. Proper education and counselling both before and at the time of method selection can help adolescents address their specific problems and make informed and voluntary decisions. Every effort should be made to prevent service and method cost from limiting the options available.

Note: Some methods are unavailable for specific time ranges
< Back to method & time selection